The Penske’s pulled a fast one on the paying public Sunday.

With leader Frenchman Simon Pagenaud running low on fuel and fellow Penske pilot Josef Newgarden – the championship points leader – nursing home a damaged car in fourth after hitting the same stretch of wall for a second consecutive year, an uninteresting sleeping pill of a race looked like it might finally become eventful on the last lap. When suddenly third Penske teammate Will Power uncharacteristically – and all by himself – ran straight into a tire barrier, ending the race under caution and guaranteeing both a win for Pags and a continued grip on the points lead for Newkid. Coincidence? We think not. We believe the Penske’s pulled a fast one.

What sometimes saves the racing in Toronto – and in deed, its only redeeming quality – are multiple caution flags. Sunday’s affair had two and therefore technically qualified, but they were too few and far between to liven up the show. NBCSN’s pre-race coverage included the gobsmackingly dreadful condition of the supposed track in Toronto and, on a happier note, Robert Wickens’ return to IndyCar driving the specially configured pace car in his home country less than a year after his tragic accident at Pocono. During his pacing duties, which necessarily carried them close to the walls, his fiancee rode anxiously along screetching at one point, “Don’t be stupid!”

The green flag flew and fans were at least treated to a clean first turn as pole sitter Simon Pagenaud led Scott Dixon and Alexander Rossi. But problems quickly began with hometown boy James Hinchcliffe bumping into Marco and getting by him. END_OF_DOCUMENT_TOKEN_TO_BE_REPLACED

Stop us if you’ve heard this one before, but Team Penske’s won two of the last three races held in Ontario – and their current drivers have won three of the last four. Fact is, thanks to IndyCar’s current road course heavy, ridiculously redundant schedule, these totally one-sided results are fast becoming a joke.

Our special prediction for Sunday is a dash more excitement than the ramshackle racing the streets of Toronto usually provides. Why, you ask? Because END_OF_DOCUMENT_TOKEN_TO_BE_REPLACED

It almost certainly won’t be a Canuck goosing the gas toward victory lane come Sunday, so who might it be? Let’s take a gander.

Of five street course races so far this year – as opposed to equally unwatchable, though slightly different natural terrain road courses – Josef Newgarden’s won two while Scott Dixon, Alexander Rossi and Simon Pagenaud have a win apiece. The cobbled together, part concrete, part asphalt and all bad track in Toronto most closely resembles dilapidated Detroit, which would seem to favor both Dixie and Newkid. Occasionally some exciting racing breaks out north of the border though, or what passes for it on a street course, which also sometimes happens in St. Pete where Josef won to kick off the fledgling season.

Like Belle Isle, the race track itself is too narrow, winding and rough for much side by side racing, let alone passing. We unaffectionately refer to it as the Canuck concrete car crusher. END_OF_DOCUMENT_TOKEN_TO_BE_REPLACED 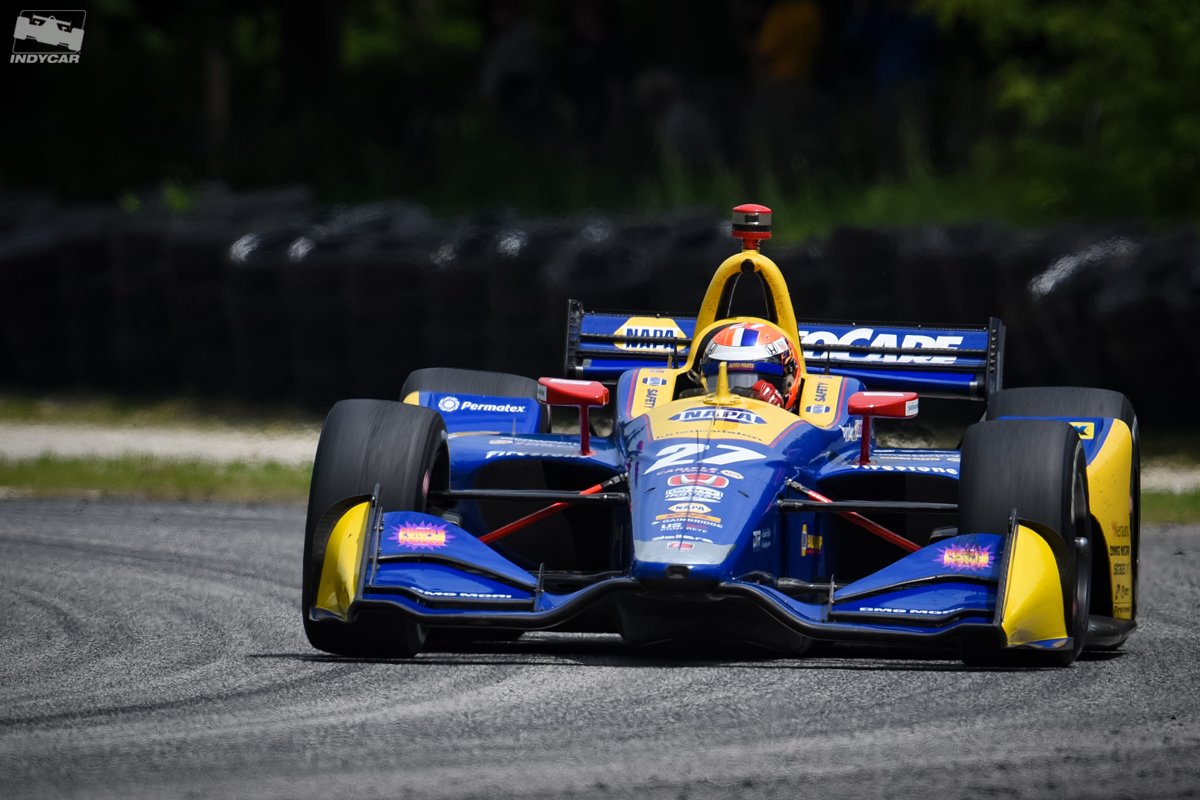 In the most lop-sided IndyCar contest in a decade, Alexander Rossi won going away for Andretti Autosport in a typical Road America laugher. In the annals of racing, perhaps never was a caution, a rain storm, or a Sato desperation banzai move more needed to liven up the show.

Sunday’s pre-race coverage was lengthy, featuring Rossi, Jean Girard lookalike Indy 500 winner Simon Pagenaud and the legendary Scott Dixon, whose dreadful luck of late was chronicled – and would continue. The start of the race saw polesitter Colton Herta lead Rossi toward turn 1, although it wouldn’t last. Rossi skillfully passed him on the outside of the corner for P1 and never looked back. Whinin’ Will Power immediately was all over the 19 year old rookie for second, a spot he’d eventually take. Herta would finish eighth.

Then Dixon spun ’round after going wide into a turn and being rudely hit from behind by Ryan Hunter-Reay (with the hyphen here to stay), dropping to last. In typical Gumpian fashion, he’d fight his way all the way back to fifth by the checkered flag. END_OF_DOCUMENT_TOKEN_TO_BE_REPLACED

If you like seeing wins from pole, precious little passing and lots and lots of fuel saving at interstate speeds, then you’ll love the Rev Group Grand Prix. Coming on the heels of Texas, for fans of fast it’ll be a total let down.

Our special prediction for Sunday’s really, really redundant road race is that riveting racing will be ridiculously rare. With a grand total of about one and a half passing zones – and that’s being charitable – Road America is one of the least entertaining tracks IndyCar visits, right down there at the bottom with Mid-Ohio. And concerning this sorry schedule of races, that’s saying something.

Pole sitter is likely to be Alex Rossi for Andretti Autosport. It’s no secret the Andrettis know their way around RA, minus Marco of course. END_OF_DOCUMENT_TOKEN_TO_BE_REPLACED

IndyCar could use another victory this weekend from its bad ass, drum bangin’, swashbuckling rookie phenom – in the worst way.

It wasn’t Alonso’s DNQ in May, or some Swede pedaling for Ganassi. It certainly wasn’t a Frenchman giving himself a milk facial at the 500, either. No, the biggest story of the year is one absolutely nobody saw coming. Thus far (and by far) the sensation has been Colton “Joaquin” Herta, especially since his breakthrough win at COTA. Becoming the youngest winner in the history of the sport, his impressive drive back in March pumped some badly needed energy into a lackluster series struggling through an unimaginitve – and notably winding – early season schedule.

Now foolishly following up the titillating Texas thriller with yet another hum-drum, just like all the others road course race this weekend, IndyCar enters its equally unimaginative mid season portion of the schedule. Therefore, it badly needs another shot of Herta hysteria. END_OF_DOCUMENT_TOKEN_TO_BE_REPLACED 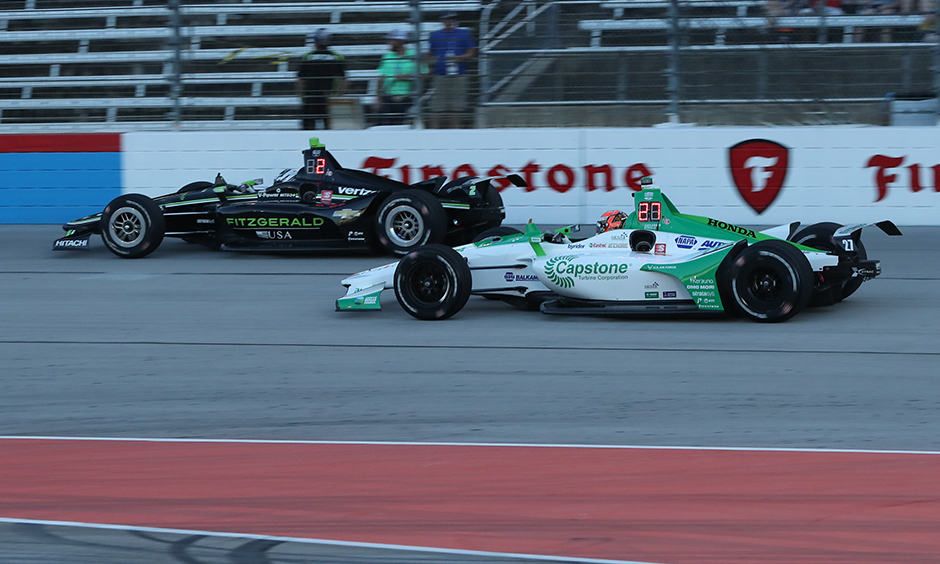 On a night chock full of miscues and head scratchers, the driver and team who made the least mistakes in Texas won.

Widely known for brain fades, Takuma Sato sat on pole alongside Scott Dixon as they led the field to the green flag with Ryan Hunter-Reay and Frenchmen Sebastien Bourdais and Simon Pagenaud making up the top five. Josef Newgarden battled with Spencer Pigot for eighth, the two black cars menacingly swapping positions. In other nearly identical looking cars, rookie Colton Herta and Alexander Rossi began a battle that’d last nearly all night. Still another Andretti Autosporter, Zach Veach, charged forward, going high around Graham Rahal for eleventh. Son of Dracula ran decently, but a late race screw up sent his car into the wall and spinning, relegating him to a twentieth place showing.

Race leader Takuma Sato missed his pit box, and hit a crew member. The crew member was back on his feet minutes later.

Pitting from a comfortable lead, Taku’s brain fade fully engulfed the proceedings. He slid hot into his pit box, recklessly slamming into a crewman and sending him flying through the air. END_OF_DOCUMENT_TOKEN_TO_BE_REPLACED

It’s one of our favorite nights of the year – IndyCar Saturday in Texas! The green flag waving over cars with the sun beginning to set over this spectacular race is highly anticipated annual awesomeness. Here’s how we see the festivities unfolding at Texas Motor Speedway – just north of Fort Worth, amidst a vast, rolling sea of grass and scrub brush.

Our special prediction for the race is exquisite, unequaled oval track racing at breathtaking speeds. This is one weekend where the drivers definitely earn their money – or in Max “risk assessment” Chilton’s case, earn a replacement. IndyCar drivers are supposed to perform death defying tasks, at least once in a while. It’s part of what they signed up for. Hell, there’s what, a whopping four oval races outside Indy? Including Texas? We wish the schedule makers at IndyCar would seriously consider green lighting more of the sport’s highest form that is racing on ovals.

Pole sitter is likely to be END_OF_DOCUMENT_TOKEN_TO_BE_REPLACED

How-dy! We’re rip snortin’, bull stompin’ excited to get back to good ol’ fashioned oval track racing Saturday night in Texas. Texas Motor Speedway is undoubtedly one of the absolute best circuits the series visits and incredibly, it’ll host merely the second oval IndyCar race in the last ten months. That’s what we call a serious scheduling screw up.

Saturday night’s race will be IndyCar’s thirty first race held on the giant oval, scene of some of the more memorable races in recent history. Since it opened in 1996, TMS has seen some of the closest finishes, most action packed, side by side racing and entertaining events in all motorsports. We at IRR have been blessed to witness several of them in person. Ahhh, the memories. Ol’ AJ bitch slapping Arie Luyendyk in victory lane, Tomas Scheckter winning for Panther and the late Justin Wilson crossing the finish line first for Dale Coyne all leap to mind. Not to mention some horrifying crashes, such as Davey Hamilton’s and Kenny Brack’s (below), both of which unfortunately shortened their careers.

If an IndyCar driver wasn’t involved in a rear end collision Sunday at Detroit, he probably won.

NBC’s rather amateurish broadcast was delayed this time by tennis from France, which after the Indy 500 was appropriate enough. While the weather proved much better than Saturday, the perfunctory Pagenaud platitudes didn’t. Qualifying was also missed due to a water delay – not from rain, but from a tire barrier – even though the recording was set for an extra half hour in case of such eventualities. Nevertheless we did get to hear “O’Canada” sung out loud as well as STP’s new front man do the US national anthem, which was superlative. Scott Dixon said he felt “very, very, very lucky” to be recognized by the Queen with an Order of Merit listing for his racing skills. Certainly no rear ending there.

Josef Newgarden and Alex Rossi made up the first row, and Colton “Joaquin” Herta and Zach “Son of Dracula” Veach the second with Conor Daly driving . . . the two seater. END_OF_DOCUMENT_TOKEN_TO_BE_REPLACED